This isn't about the CART/IRL Split 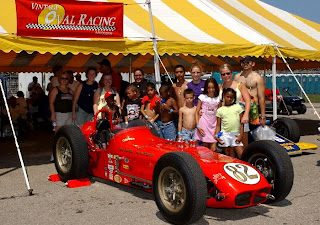 (Below is my story that I published in AutoRacing1.com in August, 2004. Photos by Gary Shook)


This article isn't about the CART - IRL split, nor the latest scuttlebutt over which driver is coming from or going to F1. It's about the wonder of kids who see a big-time auto race for the first time, marveling at the size of the grandstands, the noise of the cars, the smell of the rubber, and the antics of the drunks sitting a few rows down. It's the way that we all fell in love with racing, and the way that someone who cared for us delighted in seeing out eyes light up we got to see our first race car up-close, sharing with us something that they love.

I grew up in the Indianapolis area. Like most kids in my neighborhood, I was infected with Indy fever every month of May. Names like "AJ", "Mario," "Bobby" and "Johnny Lightning" were part of our daily conversation. We all sang the STP jingle, and Andy Granatelli was a household name. Watching nightly news coverage of the action at the track was a springtime family tradition.

Unfortunately, Indy in the late 60's and early 70's wasn't a place to take kids. Drivers regularly died fiery deaths, culminating in the awful 1973 race. Drunks outnumbered the sober. The Snakepit... well, the name speaks for itself. My mother-in-law claims she wore out her binoculars in the '74 race, when streaking was the national fad. The Indy 500 was definitely a place for grownups. Due to the TV blackout, it was a radio-only event for me during my childhood.

But now I'm a grownup. And, for all of its faults, the IRL has done a great job of being family-friendly. Also kid-friendly is Michigan International Speedway, which is just a few miles from my home. Built to accommodate NASCAR crowds of 150,000+, there are tons of unsold MIS seats for IRL races, and ISC is really anxious to fill them. If I couldn't go to the Indy 500 as a kid, perhaps I could take all those kids whose parents can't... or won't... take them to the local IRL race.

It's one thing to say that you're gonna do something, and quite another to do it, especially if you have no clue what you're doing. Memo to those who try this: You're gonna need good help. I got lucky. I'm the president of a Kiwanis Club, and among my members is a staff member of the local YMCA. She is a natural detail person, and is a natural working with kids. I had to convince her that the race would not bore the kids (she'd never been to an open-wheel race either), but my natural charm (and tons of begging) won her over. I owe her big time. Worse yet, she knows it.

Kay (that's the lady at the Y) also knew the kids that we'd take to the race. The kids she deals with come from tough homes. Sometimes mom forgets to cook supper. Many of the kids don't know their father. Kids show up for swim classes without swimsuits 'cause mom can't afford them. Some live at the local shelter for abused women. We took over 60 people (kids and chaperones) to the race. Only two of the chaperones, and none of the kids, had been to any legal auto race, even though three are held each year at MIS. 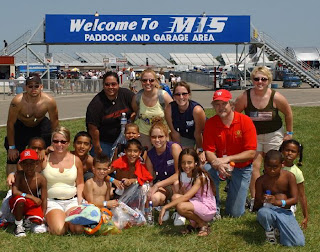 The request for freebie tickets from Michigan Speedway was the easy part. In fact, their staff people treated me like I was organizing for a major sponsor. I got 100 free tickets, no questions asked, no hassles, no forms to sign, when I explained what I was doing. Members of the press loved the idea, and the local media gave me front-page coverage. The local stores gave me food for the tailgate. The folks at Historical CHAMP / Indy Car Association even offered to let the kids sit inside of one of their cars! Of all of the companies and people that I asked to help me, only one company turned me down. We did the project virtually for free.

The best part of the whole trip, of course, was watching the kids' faces as we walked into the massive track, seeing them jump when the first engine is fired, grabbing their earplugs on the first lap. I watched as youngsters' mental wheels went into overdrive as they sat inside of a 1920's Indy car, asking the function of every lever and gauge. The seeds of a serious race fan, or even a race driver, were planted. Memo to open-wheel race fans: If you want more fans at your races, round up some neighborhood kids and take them with you.

Best of all, I have the warmest feeling in my heart. Between squirt bottle wars I saw moms bond with kids, and big brothers bond with their "littles". I saw kids suddenly find out there was a huge world beyond their own city block. People smiled, and had a great time. Memo to human beings: If you want to feel good about yourself, round up some neighborhood kids, give them some earplugs, and take them to a race.