And a NASCAR Race Broke Out? 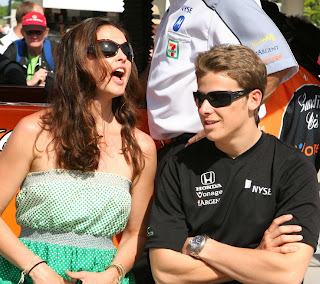 Picture of Ashley Judd, probably laughing at Marco's suggestion that she could go to the prom with him. Neither Ashley nor Marco work for me, read this blog, or even like me. Copyright, 2007, Tim Wohlford


The common joke, of course, is that "I went to a fight and hockey game broke out."

It seems as though two of the three of the IRL's best promotional events involve hockey games breaking out after a race -- AJ swinging at Arie Luyendyk after a race in 1997 (Foyt was right), and lately between Sam Hornish's father and some friend of the Andretti Family at Watkins Glen. (The third, of course, is anything that Ashley Judd does, especially if it involves rain-soaked cotton). I've met lots of PR types in the garages of NASCAR, IRL and CART, and I'm pretty sure that this isn't what they had in mind to promote the sport, but like hockey, either the fights must be stopped or more grandstands must be built.

Today, I was driving in traffic on I-94. It was fast-moving, bumper-to-bumper traffic, the kind that makes one pretend that they're driving Talladega, if for no other reason that to break up the boredom.

Well, boredom wasn't an issue today -- I looked over, and saw a driver and his female companion engaged in a remake of "Debbie Does Dallas." Even more incredibly, the lady was unclothed, at least on the top half. She was, uh, well endowed by her creator.

Mind you, this is the kind of thing we used to see in the infield of a good NASCAR race. In the good old days, I think that ESPN would employ interns to look for such exhibits of the human body, and the ESPN techs were treated to video of infield life during commercials and after the end of the race.

If I had trouble paying attention to Interstate traffic, it makes it all the more amazing that drivers could pay attention to their race while women danced au natural on top of old school buses. David Pearson, I salute you!