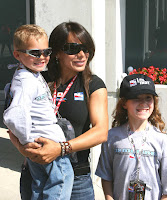 (originally published in AutoRacing1.com on 8 Aug 2007)

Milka Duno is a PR person's dream. She's popular with the fans, great with kids, and always has a smile on her face. Her killer bedroom eyes have to be hidden behind sunglasses to keep traffic flowing, and let's just say that her silhouette is never confused with that of Buddy Rice. Getting an interview with Milka isn't difficult because Milka refuses interviews, but rather because every news outlet wants to talk to her -- like the popular girl in school, her dance card is always full. Imagine a person with the charisma of 1970's pop culture icon Charo, smart enough to have four graduate degrees to her credit, in a driving suit and you'll understand why she creates a stir when she walks around the race track.

It looks like Hollywood has noticed Milka's charisma too -- AutoRacing1 was the first to break the news that Milka is making a trip to Berlin this week to appear in the upcoming movie adaptation of the 1960's anime cartoon, “Speed Racer”. She'll be missing this weekend's Kentucky race due to the filming schedule. God knows she's got the eyes for anime.

The problem is that to say she's struggled on the track is an understatement. At Michigan, driving a car set up by IRL/F1/ALMS bad boy driver Tomas Enge, she struggled to get within 5 mph of Dario Franchitti, or even within 3/10 of a second of Enge's lap time. She crashed twice at Indy, and once each in Nashville, Texas, and spun at Michigan.

The Citgo team skipped the IRL road course events, even thought Milka's prior experience is in Grand-Am, ALMS and World Series by Nissan. This puzzles more than a few IRL fans. Certainly many pundits suggest that she should've started out on road courses instead of super speedways, or at least let her run those courses in the hopes that her confidence would be rebuilt from the oval experiences.

In an exclusive AutoRacing1 interview, I asked her that very question -- When are we going to see you on a road course? She replied that the plans were for her to be at Sonoma. I then asked her why she hasn't raced on any road courses so far this year. Milka explained, “I have to learn to run the ovals. We prefer different races (for me to learn) on the ovals because there are many things I have to learn. I wanted to race the race at Watkins Glen in Ohio, but we choose like that (to concentrate on ovals, ed). I have now Kentucky, Sonoma and Chicago.” Still puzzled, I asked, “Did anything that you learned in road racing carry over to Indy car racing?” She replied, “Everything is different. Everything (is) so different, everything is new, yes, everything is soooo different.”

One wonders if “everything is different” from her sports car background, she can learn fast enough to avoid a serious crash due to her inexperience. Obviously, a year in Champ Car Atlantics or Indy Pro would've served her well. A new driver in a new team is always a tough situation, and few succeed with that combination. Instead, her team strategy has been to use 2007 IRL schedule as her “Indy Pro” year, and since Milka had no oval experience, they decided to run only on ovals.

Another part of the reason that Milka hasn't been on road courses is that the team got a late start. “There are only a handful of road courses that IndyCar will allow drivers to test on,” explained teams spokesperson Laura Tanin. “Because we announced our entering the Series at Homestead, we didn’t have the ability to practice on the courses during the off season when availability is at its best. To say it’s been a challenge to find an available spot at the few road courses during race season, coordinate with Honda and their mandatory presence, and working with the schedule has been impossible. There are many more ovals and the goal is get her hours and experience behind the wheel.”

What I do know is that her team believes in her, fiercely protecting her against all doubters. To a person, they all say she has the potential to become competitive. When the IRL placed her on probation, her team was vocal with its irritation - “There are other drivers currently on probation according to IndyCar," explained a team member. "They haven’t said who. It’s a shame that the only driver receiving this attention is Milka when she is not the only one on probation.” The only bit of criticism that I heard in her pits (I spent much of the weekend there) was that, perhaps, she's too polite, too nice on the track, and needs to be a bit more aggressive.

As for Milka, she'll be damned if she gives in to critics. I watched her get out of her car at Michigan, emotionally wrung out from the experience. Perhaps it was only frustration from a dead fuel pump. Perhaps it was the fear that every Indy driver feels at Michigan. If Milka did have any fear, she wasn't gonna admit it to me or anyone else. Before the race, I asked her, “It's got to be very scary for someone who's never been over 200 mph (prior to driving in the IRL) to come here. How do you handle it?” She went back to talking about “learning many, many things,” never once using the word “fear.” She continued: “It's hard because I'm learning in the fast way without Indy Pro, without practice. But it's an opportunity because you have to learn the fast way, every practice that you have, about the track, about the car, about the traffic – everything! But I say opportunity....”